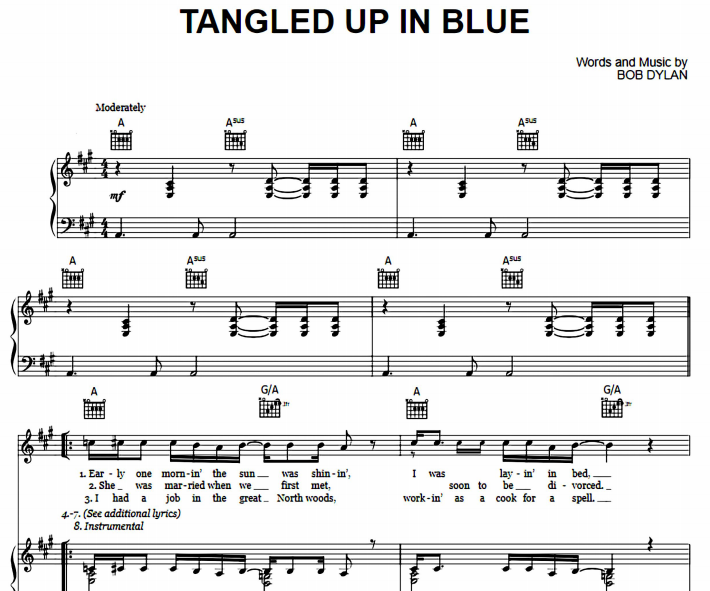 Bob Dylan – Tangled Up In Blue

Early one morning, the sun was shining
I was laying in bed
Wondering if she’d changed it all
If her hair was still red

Her folks, they said our lives together
Sure was gonna be rough
They never did like mama’s homemade dress
Papa’s bankbook wasn’t big enough
And I was standing on the side of the road
Rain falling on my shoes
Heading out for the east coast
Lord knows I’ve paid some dues getting through
Tangled up in blue
She was married when we first met
Soon to be divorced
I helped her out of a jam, I guess
But I used a little too much force
We drove that car as far as we could
Abandoned it out west
Split up on a dark, sad night
Both agreeing it was best
She turned around to look at me
As I was walking away
I heard her say over my shoulder
“We’ll meet again someday on the avenue”
Tangled up in blue
I had a job in the great north woods
Working as a cook for a spell
But I never did like it all that much
And one day the axe just fell
So I drifted down to New Orleans
Where I’s lucky for to be employed
Working for a while on a fishing boat
Right outside of Delacroix
But all the while I was alone
The past was close behind
I seen a lot of women
But she never escaped my mind and I just grew
Tangled up in blue
She was working in a topless place
And I stopped in for a beer
I just kept looking at the sight of her face
In the spotlight so clear
And later on when the crowd thinned out
I’s just about to do the same
She was standing there in back of my chair
Said, “Tell me, don’t I know your name?”
I muttered something underneath my breath
She studied the lines on my face
I must admit I felt a little uneasy
When she bent down to tie the laces of my shoe
Tangled up in blue
She lit a burner on the stove and offered me a pipe
“I thought you’d never say hello, ” she said
“You look like the silent type”
Then she opened up a book of poems
And handed it to me
Written by an Italian poet
From the thirteenth century
And every one of them words rang true
And glowed like burning coal
Pouring off of every page
Like it was written in my soul from me to you
Tangled up in blue
I lived with them on Montagüe Street
In a basement down the stairs
There was music in the cafés at night
And revolution in the air
Then he started into dealing with slaves
And something inside of him died
She had to sell everything she owned
And froze up inside
And when finally the bottom fell out
I became withdrawn
The only thing I knew how to do
Was to keep on keeping on like a bird that flew
Tangled up in blue
So now I’m going back again
I got to get her somehow
All the people we used to know
They’re an illusion to me now
Some are mathematicians
Some are carpenter’s wives
Don’t know how it all got started
I don’t what they do with their lives
But me, I’m still on the road
Heading for another joint
We always did feel the same
We just saw it from a different point of view
Tangled up in blue 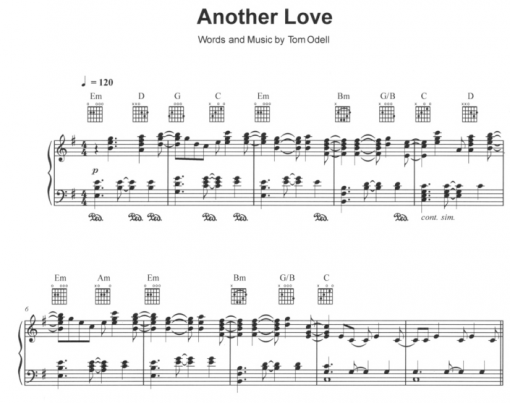 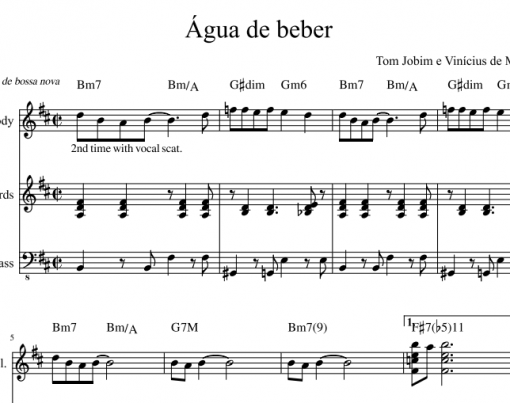